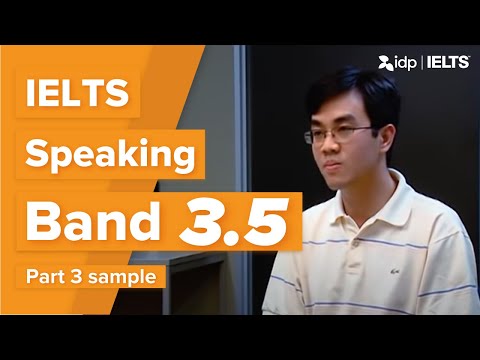 What speaking ability does a score of IELTS Band 3.5 represent?

Watch this Speaking test sample, where Harry from Vietnam talks about ‘An interest or hobby you enjoy’.

Here’s why this performance was given a Band 3.5:

“This test taker is unable to keep going without noticeable pauses as he searches for language. His speech is slow
with frequent repetition and self-correction and there are
some breakdowns in coherence. He links some ideas but can only use simple connecting words (so; because).

Vocabulary is this test taker’s strongest feature and allows him to talk about topics familiar to him. However, it is sufficient for only limited discussion of unfamiliar topics (balance; relax; salary; ability; free time for chatting; rely on drinking – it’s not good for society or people’s health).
Some ideas are repeated (good for their health).

His grammatical control is weak. Some simple sentence forms are produced fairly accurately (has more ability to meet others; may be more developed) and he sometimes attempts more complex forms. Subordinate clauses, however, are rare, turns are short and errors frequent.

He uses a very limited range of pronunciation features. His problems with hesitations and false starts have a serious impact on his ability to produce connected speech and there is little evidence of control of stress and intonation. However, it is his production of individual sounds which causes greatest strain to the listener. Final consonants are often not pronounced (becau(se); balan(ce); li(ke); heal(th)),
and some are incomprehensible without context (wishen
for ‘question’). Understanding requires considerable effort and there are patches of speech that cannot be understood.

This test taker’s vocabulary is stronger than other features of his performance, but his pronunciation is poor, restricting his rating to a Band 3.5.”